Will you ever disappoint? This time you were faced with what seemed, at first glance, a relatively staid and technical theme: “serif”. Nevertheless you rose to the challenge, with your inimitable imagination and energy – endlessly riffing, playing and transmogrifying to produce a magnificently rich and diverse array of 58 entries – a record haul for a FontStruct competition. Many thanks and congratulations to everyone who entered.

Judging was more difficult than ever, but, thanks to the excellent input of our guest judge beate, we finally reached consensus.

First up, and in no particular order, the four winning entrants:

G1 Radia was a unanimous choice of the judges. With it’s high-contrast strokes, ball-terminals and discreet little serifs this FontStruction genuinely radiates a curvesome beauty, although on closer inspection one also sees intriguing traces of its cruder, modular roots.

All four winners actually made multiple high-quality entries, some of which we couldn’t resist including in the samples, so below G1 Radia you can also marvel at the monumental G1 Valora – one of the serifiest serifs this side of the Pecos. 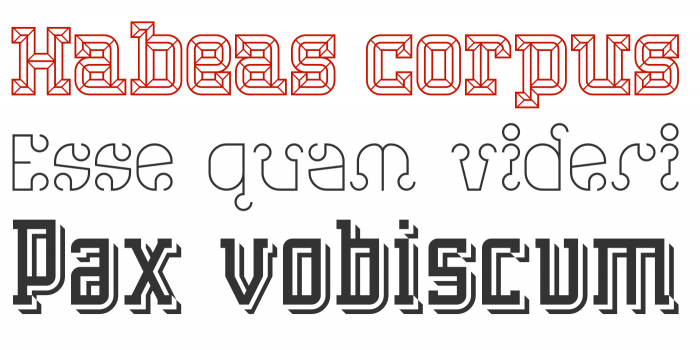 Hoek was elected by the FontStruct community as the “people’s favorite” . It obviously stems from a clear and precise concept for a bevelled slab, thoughtfully executed in every perfect detail.
In fact, the judges were even more excited by the highly-inventive “elza” (the second design featured above) in which wiry strokes terminate in a questioning hook-shape rather than a traditional serif or terminal. Planetarium, also shown above, was another strong and popular slab entry.

The judges were enchanted by Cembrel B: a subtle, attractive, and eminently-usable, high-contrast serif, part of a developing new family. Nouveaumbre was another really excellent entry from yautja.

And last but not least …

A classifier’s nightmare: a slab serif concealed inside a sans! – what an innovative interpretation of the theme. Beyond the high concept, architaraz also succeeds in delivering a coherent and attractive typeface. Beneath AT Bals you can see the elegant inline ”AT Migdalia” with it’s hairline serifs.

Many, many congratulations to our four prizewinners.

– A classic serif with an unusual calligraphic twist, created on a pin-board matrix.

– A convivial, super-chunky slab-serif, given added character by the idiosyncratic snips in certain letter-tops.

– Actually I’m not sure whether this is (at least in any sense known to me) a serif, but a strong, clear design nevertheless.

– One of three strong entries from the master of the dotted font. Some really charming glyphs in this one.

This brutal disfiguration of an existing design by Sychoff came very close to a prize. Although tagged as punk, there’s also something quite primitive and ancient going on here. I can see these glyphs scratched into the base of an amphora, or perhaps arranged in the border of a mosaic. Compare the Jekyll to this Hyde.

Congratulations again to all winners, who will be contacted about their prizes in the next few days; thanks to our judges; and, most of all, thanks to everyone who took part. I look forward to our next competition.

FontStruct would like to thank our sponsor: Creative Fabrica – your number #1 source for premium design elements.