This trademark Quintet font appears in all their SNES RPGs (namely Soul Blazer, Illusion of Gaia, and Terranigma), but with many little differences depending on the game at hand. Gaiatype is a recreation of the Terranigma typeface variant, to be exact, with its own spacing and character set.

Featuring all the European diacritic and extra glyphs as well as a complete set of all the hiragana and katakana characters from the original version of the game, called Tenchi Souzou in Japan, this marks my most extensive font to date with over 760 glyphs in total.

The base font size and recommended setting for Gaiatype is 16pt and multiples of that. Use metric kerning and no additional smoothing effects for the ultimate Terranigma experience.

Terranigma on the SNES, known as Tenchi Souzou in Japan, was developed by Quintet and released by Enix in 1995.

~ Gaiatype - created by Caveras after the original font used in Terranigma for the Super Nintendo. ~

Little example of this font in use: http://tinyurl.com/prev-gtypeex 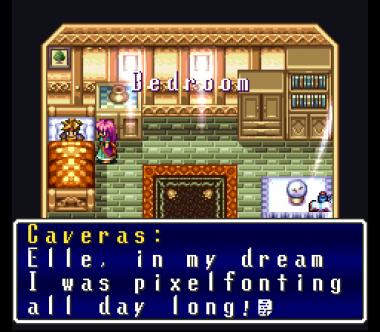 Where is capital letter "A" and "E" with ogonek?

I've started expanding on this font a few days back although it was already published, so the common missing glyphs will be added in a short while.