The results are in for the second FontStruct competition “Handmade”. It was a thrilling three weeks with some quite extraordinary FontStructing and offline handiwork appearing on the site. I hope all participants and everyone else had as much fun as I did. The standard of entries was extremely high, making the task of judging an extremely difficult. The judges came up with a very broad and diverse range of favorites, but once the votes had been added together, some clear winners emerged.

Particularly impressive overall was the diversity to be found in the interpretations of the handmade theme. Before announcing the winners, here’s a survey of some of the judge’s favorites, roughly organized by their general approach to the theme. 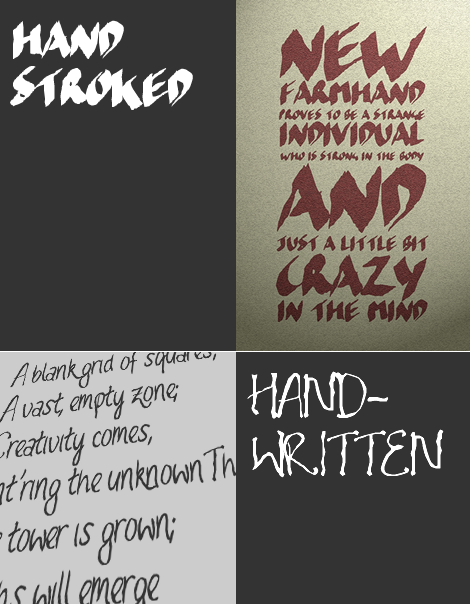 Some FontStructors interpreted “Handmade” as “handwritten”, and created designs recreating the dynamic, irregular movements and forms of human script. djnippa‘s “NCD Edding 5.0” is a wonderful simulation of writing using a modern, square-cut calligraphy pen. Eminently usable, albeit with a limited character set, this is a beautifully-crafted design that belies its FontStructed nature, even at very large point sizes.

“ambdx” by 3moDuDe was another “handwritten” entry which featured prominently on the judges scorecards. It’s not easy to use the limited geometrical shapes available in FontStruct to emulate the flow and blot of ink and create something with a clear human personality like this. Well done, 3moDude! 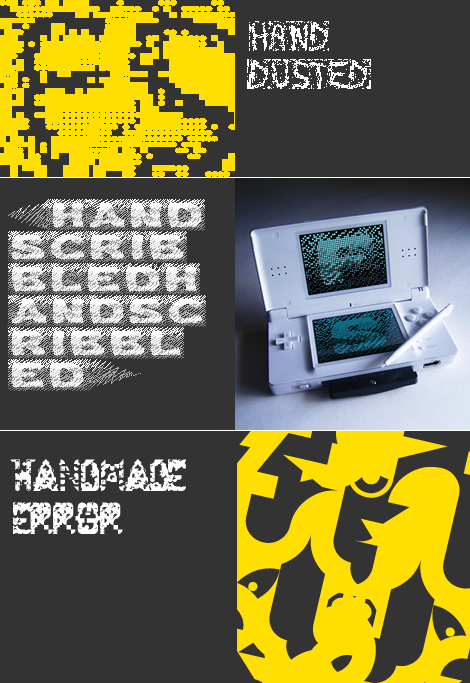 Several FontStructors contributed entries which somehow played with the contradiction of the digital and the handmade. “Memories” by softhunterdevil for example is a powdery, dusty disintegration of pixels which  somehow looks like the product of an imperfect human hand, but is also clearly digital. “Memories” also featured on a number of judges scorecards.

“Scribblenot” by geneus1 was “Digitally hand-scribbled over a hand-drawn typeface”. I suspect some sleepless nights were spent working on this one. It’s a very strong concept. I especially appreciated the extra thought that went in to creating the “zap” and “scribble” characters in the bracket slots – these kind of details make a font really fun to use.

neurone_error‘s entries, like “00ne_Paraphilia” above, are hard to categorize but are certainly not handmade in a literal sense. They continue to explore his signature digital-baroque style. Zoom in close to discover the graphical microcosm within. 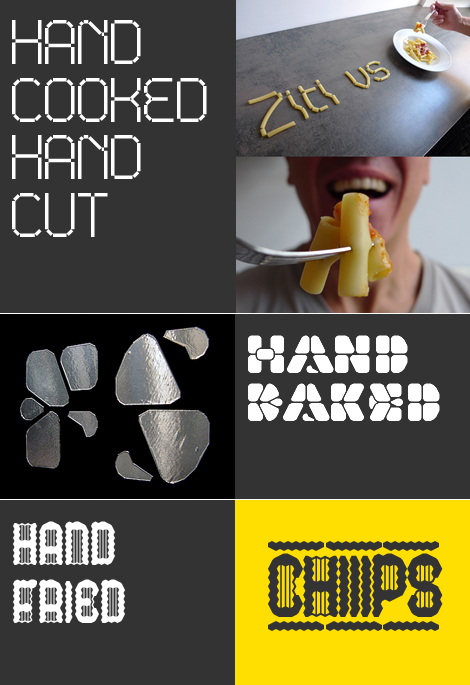 From top: “Ziti” by Em42, “FS Croissant” by thalamic and “Scherenschnitt Französisch Frites” by funk_king

At this point, a special shout out to “nazlfrag” who first coined the term “macaroni bricks”. The phrase (describing the new quarter-ring bricks recently introduced to FontStruct) instantly became part of FontStruct community vocabulary and is part of the background-story to “Ziti” by Emilio Ignozza aka Em42. “Ziti” is not only a very tasty modular typeface but also the wittiest concept in the competition. Emilio is well-known in the community for his minimalism and his skepticism regarding new brick shapes, so there is a wonderful, playful logic to his design. Rather than using the new macaroni shapes, he builds letters out of broken pasta rods and forms rounded corners using straight lengths of pasta. The documentation of this project and the photography on FontStruct and on Emilio’s own website is really exemplary.

Two other food-related entries praised by the judges were “FS Croissant” by thalamic and “Scherenschnitt Französisch Frites” by funk_king. “FS Croissant” is another innovative and attractive modular typeface from Ata Syed. This one I would personally gladly eat for breakfast every morning with my coffee, while the deep-fried fun that is  “Scherenschnitt Französisch Frites” should be enjoyed later in the day, with plenty of ketchup. 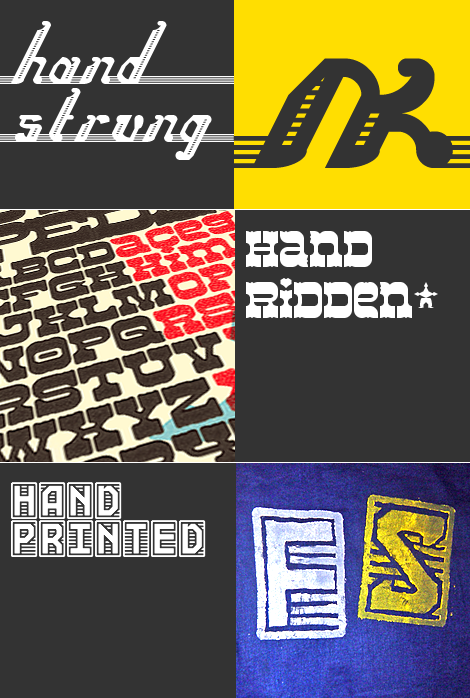 From top: “Woodcut Banjo” by funk_king, “Stampede!” by will.i.ૐ, and “fs Ooki Woodcut” by thalamic

Several entries explored a woodcut interpretation of the handmade theme. “Woodcut Banjo” by funk_king is an unusual and characterful script with a handcarved (or burnt?) feeling. “fs Ooki Woodcut” by thalamic is a very neat and usable set of “wooden” printing stamps. Check out the comment thread for the entertaining story of how he hand-printed some of his letters using an inner tube, his kids’ old toys and his mother’s oil paints. Not everyone went to the trouble of making truly handmade samples but I get the sense that those who did really had a lot of fun.

“Stampede!” by will.i.ૐ should not be hiding away in the middle of a blog post. It really deserves a blog post to itself, and was singled out by several of the judges for its beauty and usability. Perhaps the only reason it is not one of the winners is that the handmade reference is not strong enough, I’m not sure. In any case, it is without doubt a brilliant piece of work and most probably the best FontStruction in the western genre to date. 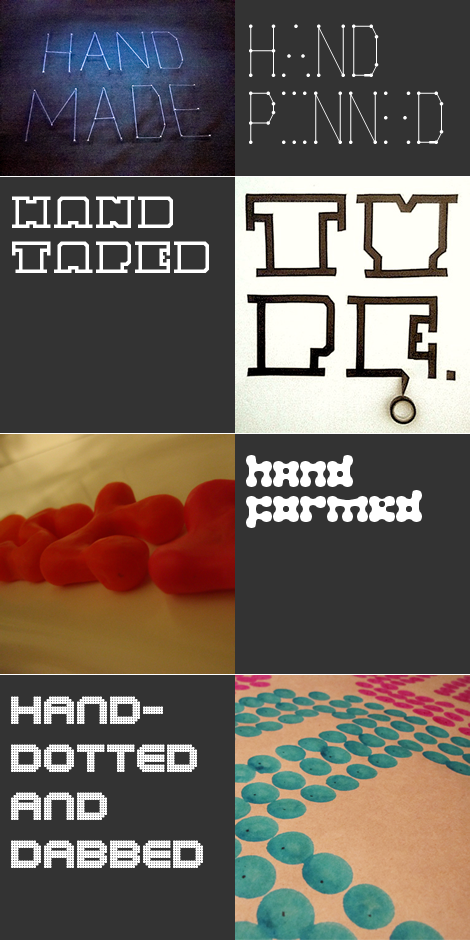 – Some other excellent entries with fun handmade samples. I’d like to single out “Pushpins” by aphoria which appeared right at the top of one judge’s scorecard. It is a strong, clear and fun concept with a direct but unique interpretation of the theme. I love the way the upper and lower case were used. Kind of perfect really. The beautiful sample is from minimal AKA thalamic AKA Ata Syed. 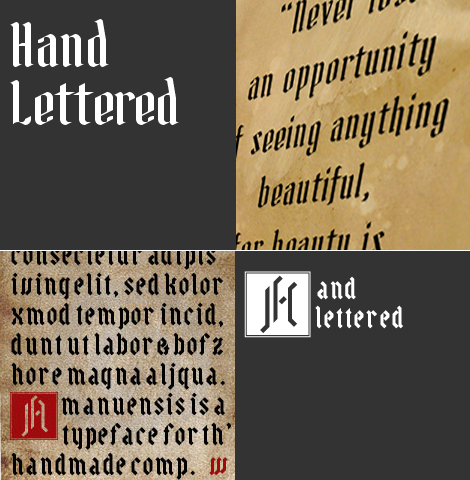 From top: “Calligraphique” by geneus1, and “Amanuensis” by riccard0

Also worthy of mention are those entries which fall within the favorite FontStruct genre of “Blackletter”. “Calligraphique” by geneus1 is simply a gorgeous, gently-gothic script. “Amanuensis” by riccard0 is a characterful blackletter notable for its inclusion of illuminated capitals. Perhaps a first in FontStruct?

In third place, “Graffikki” by geneus1. 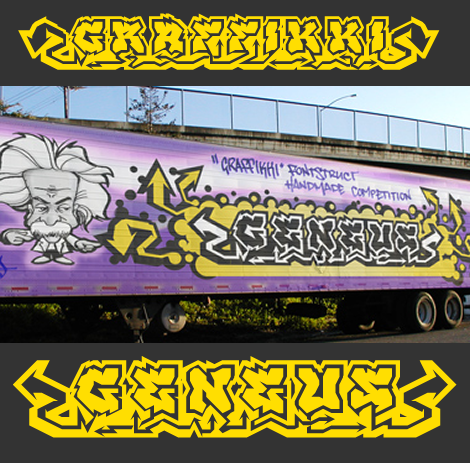 This is a technical and creative tour-de-force, packed with dynamic energy in the letter forms and in the movement of the arrows. The alternate characters in the two cases, and the variety of arrows in the bracket slots make this FontStruction extremely fun to work with and I strongly recommend taking it for a spin. I suspect this gem has been being polished in geneus’s secret treasure cave for some time. Thanks for sharing!

A really original concept and typeface. Apparently simple, clear and logical in digital form, it comes to imperfect and complex life in the beautiful hand-folded samples. This is the work of someone who takes FontStruct seriously. I’m personally very grateful for that. Check out the documentation and folding-of video at House42.

And now, TADADA DADA DADAAA!!! the winner of the FontStruct “Handmade” challenge, and also winner of the inaugural people’s choice award is “NCD Embroidery Comp Size” by djnippa.

All of djnippa‘s entries were prizeworthy this time around. Even the FontStructions which didn’t make it through his own rigorous editing process could have been in contention, but “NCD Embroidery Comp Size” emerged as a clear favorite of the judges and of the community. Again, the concept was clear and addressed the theme directly. The font is attractive, legible, highly usable and thought-through to the last ingenious detail in the punctuation. Congratulations djnippa, and where can we buy a cushion cover?

Winners will be contacted regarding their prizes in the next few days.

That was epic. Many (the majority) of the entries will be top-picked over the next days and weeks. The winners will be featured on the site for at least two weeks as the new featured downloads. All entries can be reviewed here. Thanks again to all participants for sharing all of your wonderful creations, and a special THANK YOU!!! to our eminent and conscientious jurors who gave so generously of their time.