What makes a complete font?

When you open the FontStructor you are presented with that familiar row of character slots sorted alphabetically. If you’re like many FontStruct users, you build your FontStruction by following these slots in order — starting with the caps, then plodding along, drawing one character after another, through the lowercase, numerals, and basic punctuation until you finally reach that lively little tilde (~) that seems to wave like a victory flag: “You’re done!”

But are you done? Not if you want folks in Sweden to use your font. Or Denmark. Even Germany, France, or Spain will take a look at the fruit of your tireless labor and find it woefully incomplete. The countries of Eastern Europe are out of the question. Not to mention the rest of the world. 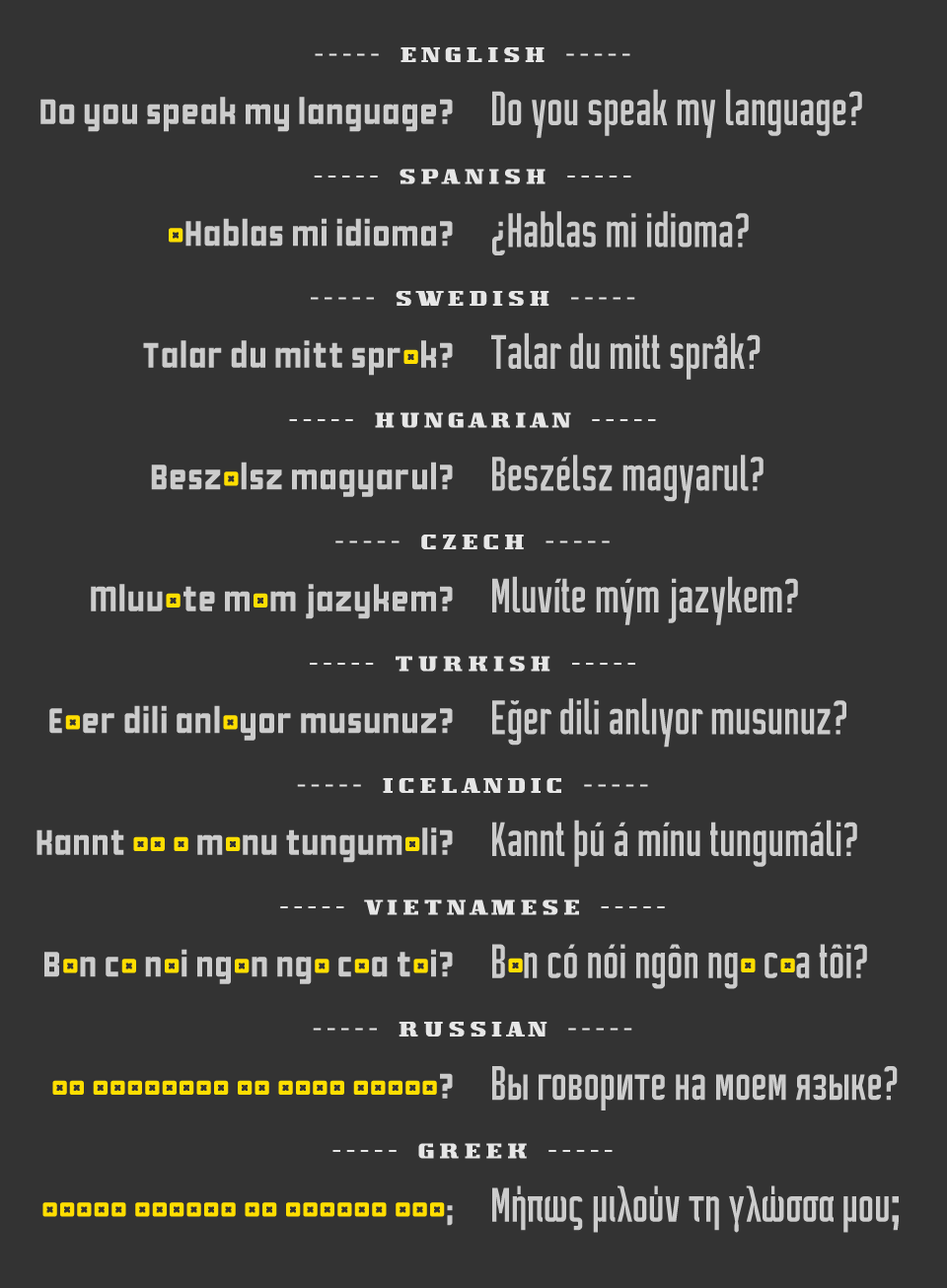 Above: On the left is my WPA Gothic, a FontStruction I was pretty proud of … until I saw what an uneducated slob it is! The font has about 200 glyphs but it’s still missing the characters necessary just to set a simple sentence in languages commonly used throughout the Western world. By contrast, the multilingual Modular Blackout Bold Condensed is capable of all these languages except the oft-neglected Vietnamese. (Language labels set in Renovare S2. Missing character boxes set in IconoMono.)

A 26-glyph, 52-glyph, or even 200-glyph FontStruction can be a useful exercise for prototyping and experimentation, but it is rarely considered a working font. So let’s look at what else your font needs to advance beyond a fun little piece of art to a truly useful tool.

In the interest of simplicity this initial row in the editor is limited to only the bare minimum of letters and punctuation. Thus the title of the character group: “Basic Latin”. And while 100 or so glyphs seem like a lot — especially when you’re limping through the set of a particularly challenging design — this group of characters is really not enough to say more than a few things in English.

What’s missing? Accented characters (or diacriticals), of course. The bits that English-centric folk might consider superfluous appendages or “extra” characters are actually standard and necessary in other languages. In Spanish, the n and ñ are individual and distinct letters of the alphabet, each with an identity and pronunciation of their own. In French, a mouthful of sablé (cookie) is more desirable than a mouthful of sable (sand). In German, you can get by without an ß (eszett) by typing ‘ss’ but in most cases it’s linguistically incorrect. And none of this even touches non-Latin languages like Russian (which uses the Cyrillic writing system) and Greek.

So what makes a complete font? The answer isn’t so simple. In fact, an absolutely complete font probably doesn’t exist. Fonts that are bundled with operating systems have a massive arsenal of characters, covering most of the Western world, but even most of those don’t speak languages like Arabic, Hindi, or Chinese.

But lets take a step back and assume you want your FontStruction to be usable in at least the most common languages that use the Latin script. Head on over to the character set menu and move beyond Basic Latin to More Latin. This set covers much of the Western world, from North and South America to Western Europe. Even Turkish is supported. Not counting the extra punctuation, fractions, and currency symbols at the end of the row, it’s 65 more glyphs to build. Feeling overwhelmed? Don’t despair — many of these characters are variations on letters you’ve already made. With a few exceptions, you can get by with a copying, pasting, and adding a diacritical mark. The “Copy to Latin Accents” command in Expert Mode expedites this process. If legibility and cultural sensitivity is important to you — and it should be! — take some time to learn how these marks are designed and placed. Microsoft’s Character Design Standards and the Diacritics Project are very helpful guides. Once you complete these characters your work is on par with the entry-level of most commercially available fonts.

If you want your font to get play in the countries of Central and Eastern Europe you’ll need to graduate to Extended Latin A. This range covers languages like Croatian, Czech, Finnish, Hungarian, Latvian, Polish, Romanian, Serbian, and Slovak. Once you cap that last ‘z’ with a caron you will have completed a font with the same linguistic chops as the most premium commercial releases. Products with this extended language support are often stamped with a “Pro” label (see Adobe and FontFont’s definition) and are sought after by multinational corporations, publications, and any organization whose interests are global.

So you’ve got the letters necessary to speak all the languages you want to support. But you can’t string together meaningful sentences without punctuation. While there are myriad esoteric symbols for specialized fields like music, math, and science, let’s focus on the basic punctuation required for written texts in most Western languages. The obvious necessities are:

What punctuation could be considered optional?

Are we there yet?

So what is a complete font? If FontStructing is simply a relaxing hobby, then the answer to that question is entirely up to you, the designer. But if you intend your font to live a life outside of the FontStructor, it is ultimately up to the user. And their definition of “complete” is based on a combination of their particular needs and expectations derived from other professional fonts. No matter how inventive or appealing the design of your alphabet may be, if your font is missing what your user needs, they will likely move on to a more well-equipped option.

We hope this introduction familiarizes you with the characters and symbols that are commonly neglected, so your hard work won’t be.

Stephen is a writer and typographer living in Oakland and Berlin. After six years at FontShop San Francisco as a creative director, he now publishes Fonts In Use, Typographica, andThe Mid-Century Modernist, and consults with various organizations on type selection.

FontStruct was designed to be self-explanatory. We built the editor so that anyone, without any type design or technical experience, can get started right away. But it’s always nice to have a moving, talking guide. So, here’s our first screencast: an introduction to FontStruct. Let the soothing Scottish timbre of FontStruct creator Rob Meek guide you through the basics of the application.

UPDATE: Please note, FontStruct has been enhanced since this screencast was recorded. There are some minor differences between the interface shown in the video and that in use on the site.