(This article was originally published on FontShop’s “FontFeed” blog. Many thanks to MonoType for permission to reproduce this article here.) 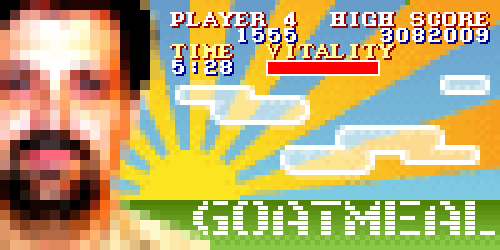 This is the fourth in our series of mini-​interviews with FontStruc­tors. In this instalment we talk to Goatmeal, a FontStruct user with a singular hobby – FontStructing classic arcade game fonts. Well, it’s more than a hobby; judging from his comment on the Bentley Bear 2 page it’s a calling:

After watching me push pixels around the FontStruct field last night to make another arcade game font, my wife asked, “Why are you doing this?”

I really appre­ciate the oppor­tunity that FontStruct provides to preserve these classic typefaces from my youth spent in the video arcades!

In reply to my invitation for the interview Goatmeal describes himself as “more of a typeface enthu­siast / fonta­holic; while I like to think I’m graphically-​inclined, I have no formal training – I’m just nuts about typefaces.” Well, as it turns out this is exactly what we are looking for for the mini-​interviews. While we certainly don’t mind having the odd profes­sional graphic artist or hotshot type designer, the common thread in this series is the dedication and the passion these FontStructors display in their work. 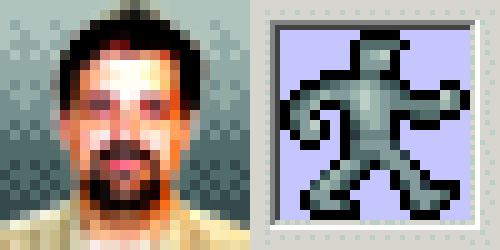 Goatmeal is the Director of R&D for a small vinyl manufac­turing company in the South­eastern United States. He graduated from the University of Michigan-​Flint, majoring in chemistry with a mathe­matics minor. While he can draw quite well (wanting to be a cartoonist during childhood), he has no formal training in any of the graphic arts; so, he comes at this from a fan’s perspective: a typeface enthu­siast, a fonta­holic, enjoying typefaces for their purely aesthetic qualities.

What is your relationship to type and typography?

The first two font sets I bought were the Bitstream Font Packs “Star Trek” (1992) and “Star Trek: Next Gener­ation” (1993) – I still have the original diskettes (ed. Although the Font Packs were discon­tinued most of those fonts are still available). Aside from being a Star Trek fan, it was the first time I noticed typeface styles as art, as opposed to mere conveyances of ideas or thoughts. 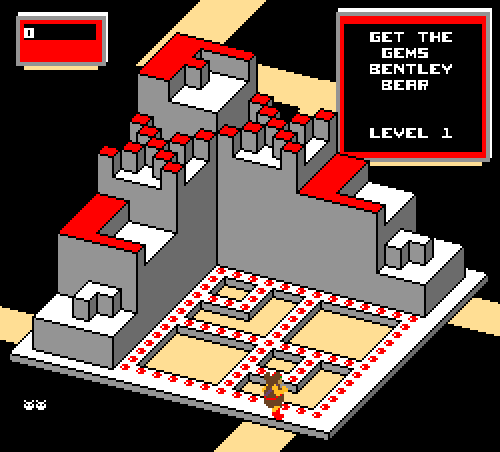 Bentley Bear, font from Crystal Castles, © 1983 Atari
Having the same revelation as others in the type design industry, I began to wonder why I liked one type style, but not another? What was it about a certain typeface that did or did not appeal to me? Why did it matter? Should it even matter? A few simple typeface styles could be used for the vast majority of appli­ca­tions across the planet (differ­ences in language-​specific glyphs, notwith­standing), but instead, there are hundreds of thousands of different styles available. Most people notice, use them (i.e., read) and subse­quently ignore or forget them every day.

What most people aren’t realising is that typeface choice is as important to the meaning it conveys as the idea or thought being conveyed – associ­a­tions, if you will. When the marriage of form and meaning is expected or antic­i­pated, it works. Otherwise, the associ­a­tions can hinder the effec­tiveness of the message, even though it can be under­stood: grunge fonts appear out-of-place on wedding invita­tions, whereas calli­graphic styles are equally incon­gruous on rave/techno flyers; wide, angular sci-​fi display fonts do not imply “fantasy, medieval” themes any more than Celtic and Old English fonts imply “space, robots, futur­istic” themes; and don’t even try using Comic Sans MS on your resumé! 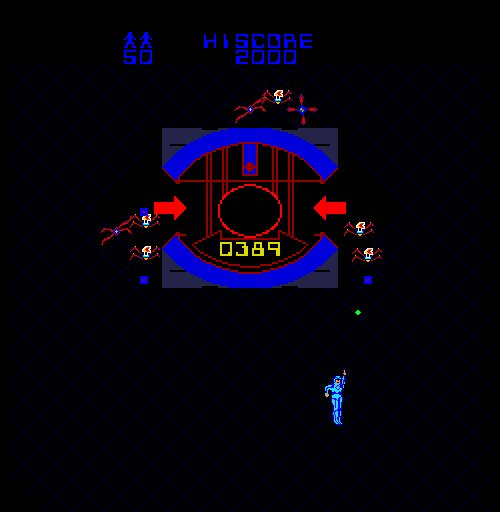 How did you start out on FontStruct?

Back in March 2009, I was looking for a dot matrix font to replicate an old high school paper I wrote in the mid-80s (a report for computers class on the state of computer animation, focusing heavily on the movie Tron). The perfo­rated paper was starting to deteri­orate, and the ink was fading. Since it was origi­nally written on a TRS-80 Color Computer, I couldn’t simply port it over to a modern day IBM-​clone (yes, I’m old enough to still refer to PCs as IBM-​clones).

Wanting to maintain the feel that it could have been ripped from an old tractor-​feed printer from 25 years ago, I searched for a font similar to the dot matrix print on the page. Unfor­tu­nately, most dot-​matrix fonts don’t truly capture the pin-​strike complexity that printers could achieve in the ’80s. That’s not to say most 7×5 fonts don’t achieve their intended purpose – they are quite good at simulating various visual displays – but none were what I was looking for on this project. 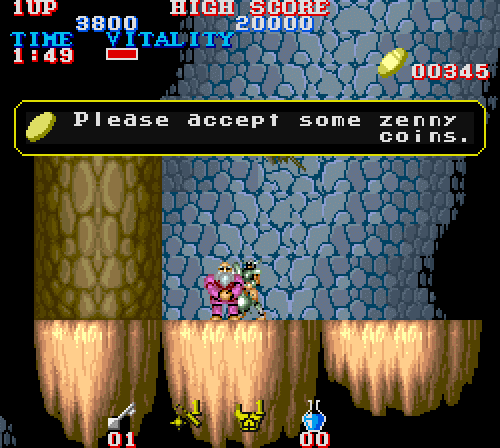 Zenny Coins, font from Black Tiger, © 1987 Capcom
That’s when I stumbled upon Fonstruct through Google. Seeing some of the pixel/dot matrix fonts others were sharing, I watched the FontStruct how-​to video and started making one myself; that eventually became my DMP-200 RS font. While I did not create an exact match, it does come close to my archived papers from the 1980s.

I once attempted to alter Tommy Cary/MarianFudges’ “Texas LED” True Type Font into what eventually became my CASIOpeia font, but it proved too difficult at the time. Having a vast, unstruc­tured field in something like the old Fontog­rapher can be quite daunting to a novice. Even the few copy-​protection dingbat/symbol fonts I managed to create to repli­cating old computer game manuals were all initially based on a grid of individual squares that I would subse­quently modify and shape…

That being said, I wasn’t crazy about pixel fonts, per se, before my experi­ences with FontStruct. They only had an inherent appeal to me if they were somehow related to video arcade games, computer games or had a science fiction feel. Now, thanks to FontStruct, minimalist pixel fonts are a category I am thoroughly enjoying. 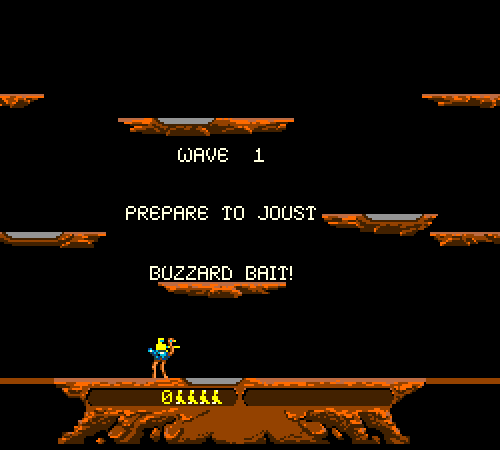 Where did your fasci­nation for vintage arcade game typog­raphy originate?

Coming of age during the birth of video games was a tremendous influence on me, as it was for most of my generation.

Aside from typing tutorial computer games (pressing the correct key to blast the letter on the screen), typefaces aren’t front-and-center elements in 99.99% of video games – they are ancillary, yet necessary, compo­nents. They are mainly used for explaining the game’s “plot” or game play instruc­tions, keeping score, indicating level progression and entering initials/words for high-​score bragging rites.

Well before becoming a font enthu­siast, games that tried to do something different with the design of text appealed to me tremen­dously – especially those of a science fiction nature. For example, while I did not play Robotron: 2084 often, I was fasci­nated with the text because it looked “futuristic/computer-like” to me. With FontStruct, it just made sense: instead of using pixels to generate a video screen display, why not use FontStruct pixels to generate a font? The result was Genetic Engineering Error. 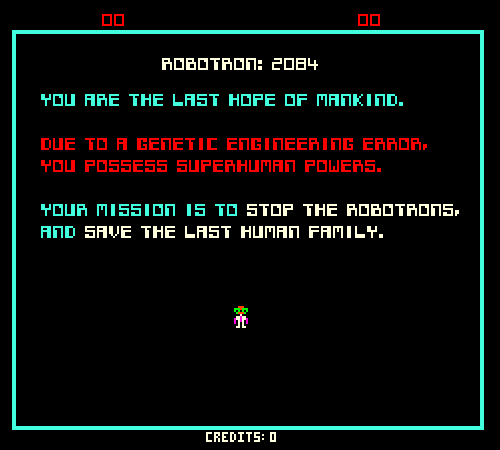 You seem quite obsessive (in a positive sense) in your efforts to catalogue all these fonts. How far do you want to take this project?

It’s an obsession borne from being a perfec­tionist with a penchant for collecting.

I’m afraid that it may be coming to an end pretty quickly. Most games used the design style repre­sented in The Video Arcade Game Font. Others used simple sans serif designs that aren’t terribly inter­esting. For numerous games, it’s difficult to get a full set of characters, and one of my goals was to make complete fonts for others to enjoy and use. Also, this is a rather selfish project – I’m only choosing fonts that appeal to me, rather than archive each and every available sample. Add to that, as graphics became more sophis­ti­cated in the mid-to-late ’80s, typeface design styles became less distinctive and more homog­e­nized. That’s not to say that there aren’t styles worth repli­cating, but they tended to become functional/utilitarian – very likely to avoid compe­tition with the enhanced graphics on the screen.

I have branched out into other categories, repli­cating existing fonts designs in pixel style (Material Electrons, OCR-A), and other types of LCD/video display fonts (CASIOpeia, Hand Aviator series). 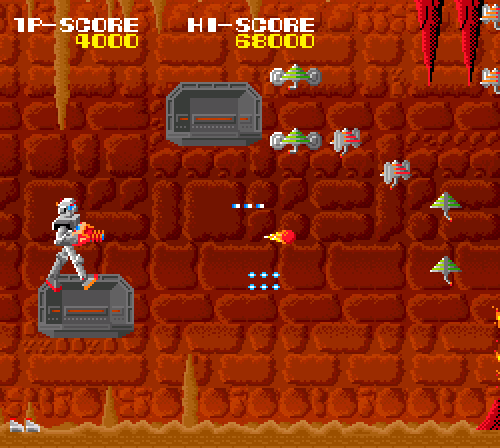 What are the aspects of FontStruct that make it so appealing? 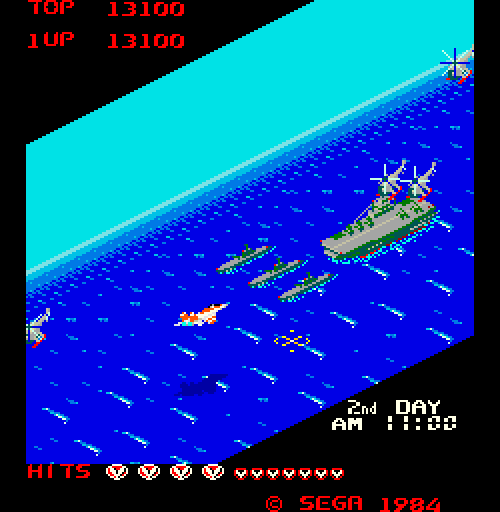