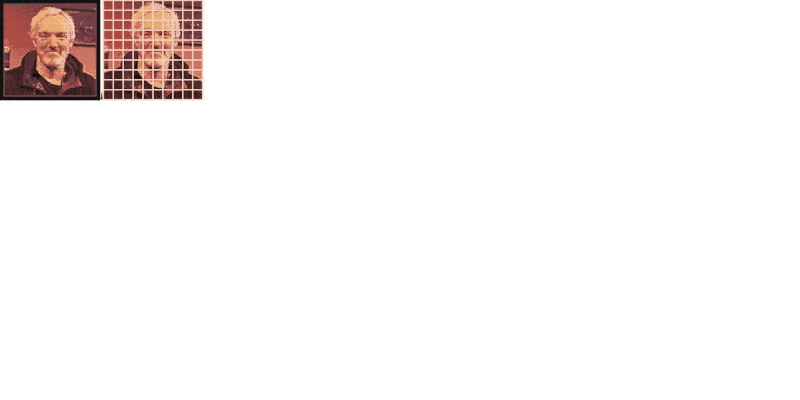 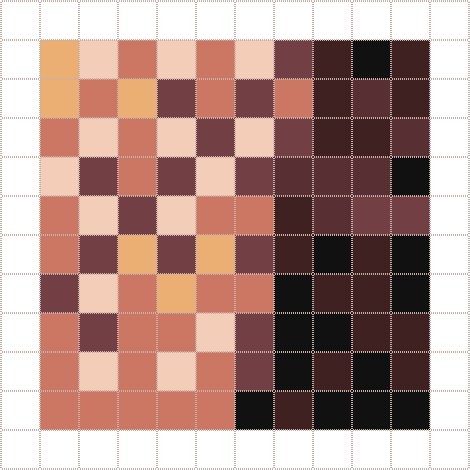 @thalamic - Are you using a little @TH3_C0N-MAN pixel transfer magic here, or did you do all of this manually?  8^O

Nice pixel work. Thank you for sharing the colour palette. I prefer the first version to the second "behind bars" version. : )

I've found a positive match between your sample and the 7:7 square. You could create a sliding puzzle with these squres. 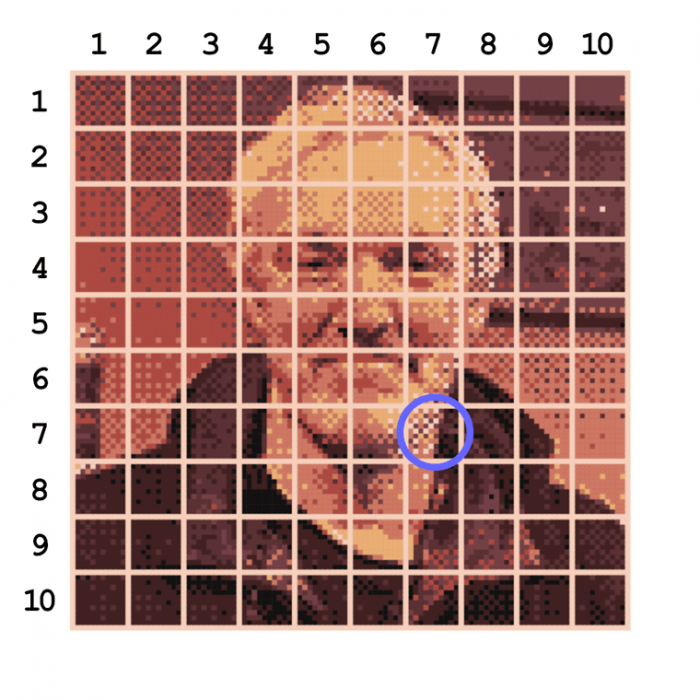 Thank you, elmoyenique, Goatmeal, and Frodo7 for your comments.

Goatmeal: I wish I did, but I don't have the mental capacity to imagine the whole thing in patterned pixel layout in my mind alone. I worked out the pixel image in Photoshop first and then used it as a reference to know where to place which color block.

Frodo7: As always, I am impressed with the careful consideration you give to everyone's work. It's very generous.

As for the second, gridded version, it is actually the first version. Initially I was doing the whole picture as one block and I made frequent mistakes in placing the color blocks. Then I decided to break apart the whole into 10×10 blocks of 10×10 pixels. That instantly brought the errors down to ~zero. Then I just recombined the blocks to form the whole.

I love the dithering in the image. That's a method that was used in many retro stuff to try to get more color within color limits…

@thalamic - I was thinking more along the lines of @TH3_C0N-MAN's "Fontstruxius" program from December 2019 (which now returns an error), where you could import pictures directly into a dithered FontStruction. The downside was that the FontStruction could only be displayed in the preview window; the generated TTF lost all dithreing and was rendered as a simple black & white shape, with all fine detail lost (like an old non-greyscale fax machine).

Even though you used a Photoshop template to plan and prepare this project, you've done amazing work here, seeing as this was all created manually, brick by brick.  This is similar to how I created my Arcade dingbat sets from 11+ years ago, but you had a much, much larger canvas to capture here, along with various color layers!  I just had to approximate a greyscale effect...

(And no wonder it took 2 months between interviews; you were working on getting this finished!)  ;^)

I'm with Goatmeal - thalamic is unbelievably awesome. At a noticeably lower level, a similar procedure was used in FS by loboarcher and kix, and exposed here by Frodo7 (so well explained that I dared to use it myself a couple of times). But the colour, ah, the colour... Fantastic!

BWM: My grounding in pixel graphics happened with Atari 2600, the Commodore 64, Nintendo (whatever the first one was called), Gameboy, Gameboy Color, etc. I've spent countless hours looking at pixel graphics. Some of it must have left an impression.

Goatmeal: I wasn't aware of Fontstruxius so I couldn't have possibly used that. Wish I did though. Your work and that of Frodo7's Che and even earlier, Kix's Marilyn Monroe, and even earlier, our group illustration font was the thing that made me think to do his portrait in FontStruct because it seemed like a fitting thing to do. Initially, I planned for it to use FS's first set of bricks with filter set to 0.8 so that each brick was visible, but when I actually sat down to do it I realized two things: I'm not artistic enough to pull that off and current FS implementation tribute is more appropriate. That's why I used color layers. As for the two month break, no, I wasn't working on anything FS during this time. This portrait fs only took two day. The time off was because I needed the time off as each interview took roughly 40 hours of work on my end (apart from the greater work on the interviewee's end) and the resumption of university semester which didn't leave much free time anyway. Well, that's not entirely true. The real truth is that I am at the age now when at the end of a full day of work, the only thing I want to do is to not do anything. So not anything is what I did. :)

WOW! i was seacrhing roblox, but i found this somehow. 9/10

@Logan2020 - Sadly, the FontStruct seach engine only looks at the first 3 letters of any seach phrase entered, and NOT the entire phrase or keyword itself.  The first 3 letters of "Roblox" [R-O-B] resulted in this font being displayed because it's tagged "Rob Meek" (also R-O-B).  I discovered this a while back when searching for "Krondor"; everything starting with "K-R-O" was displayed...