Hey guys, ItsKawaiian the Youtuber here! This is my very first FontStruction, and I have remade the Braille Alphabet for you to use to make hidden messages! Braille /ˈbreɪl/[a] is a tactile writing system used by the blind and the visually impaired. It is traditionally written with embossed paper. Braille-users can read computer screens and other electronic supports thanks to refreshable braille displays. They can write braille with the original slate and stylus or type it on a braille writer, such as a portable braille note-taker, or on a computer that prints with a braille embosser. Braille is named after its creator, Frenchman Louis Braille, who went blind following a childhood accident. In 1824, at the age of 15, Braille developed his code for the French alphabet as an improvement on night writing. He published his system, which subsequently included musical notation, in 1829.[2][3] The second revision, published in 1837, was the first digital (binary) form of writing. Braille characters are small rectangular blocks called cells that contain tiny palpable bumps called raised dots. The number and arrangement of these dots distinguish one character from another. Since the various braille alphabets originated as transcription codes of printed writing systems, the mappings (sets of character designations) vary from language to language. Furthermore, in English Braille there are three levels of encoding: Grade 1, a letter-by-letter transcription used for basic literacy; Grade 2, an addition of abbreviations and contractions; and Grade 3, various non-standardized personal shorthands. Braille cells are not the only thing to appear in embossed text. There may be embossed illustrations and graphs, with the lines either solid or made of series of dots, arrows, bullets that are larger than braille dots, etc. In the face of screen-reader software, braille usage has declined. However, braille education remains important for developing reading skills among blind and visually impaired children, and braille literacy correlates with higher employment rates. Don't forget to download and subscribe to ItsKawaiian on Youtube! https://www.youtube.com/channel/UCS52aVpZU096DGGUI-I7Z1A

By the way, The actual Braille Alphabet only contains letters and numbers. I created the symbols.
*A-J is 1-0 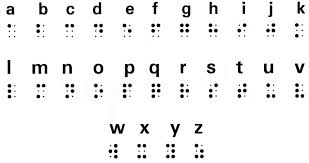