I got this crazy idea that I wanted to create a script that looked like it had been created by tiny pastel horses (you're allowed to laugh). My inspiration comes from the Burmese script and a few other closely related ones that all kind of look like hoof prints stringed together at different angles.

There was just one problem: FontStruct doesn't do these circular letters. So I used FontStruct to create a prototype with mostly 5×5 and 7×5 letters to make the most out of the rounded corners.

Once satisfied I set out to find a bunch of tools to create "real" fonts. Inkscape and Fontforge looked like the perfect combination for a cheapskate like me. Designing the letters in Inkscape was easy since they consist of a few standard elements combined at different angles. These elements in turn mostly consist of circle sectors merged together. Fontforge on the other hand is a constant source of frustration. The constant crashes are the least of my problems. Paths that are imported will contain several errors that need to be fixed and however hard I try I can't seem to adjust widths and bearings in a way that makes sense.

Currently the script takes about 90% of its letters straight from Burmese while the vowels are more closely inspired by Shan. The script is used to write English phonetically and works as a not-really-an-abugida. There's no inherent vowel and it thus works more like Tolkien's Tengwar. Initial consonants are written as conjuncts while final consonants are mostly written as a linear sequence. The twelve vowels of RP have been merged into ten. There are two sets of vowel diacritics: the regular ones based on Shan and the overly cutesy ones consisting of hearts, gems and celestial bodies. 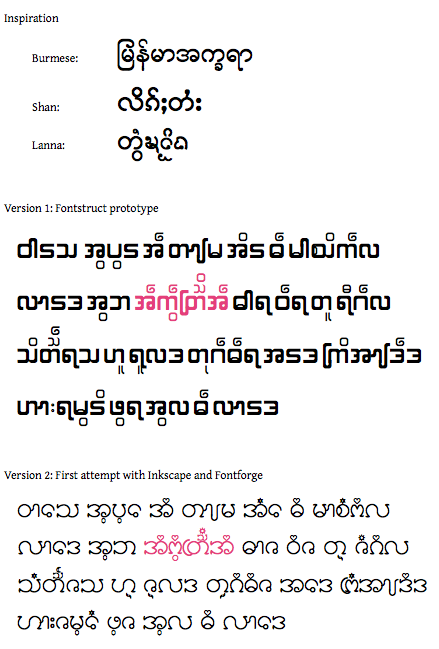 Amazing! I've wanted to try this out but never got the actual motivation to do so. I'd suggest the captital R in version two to be actually be a segment of a larger circle to prevent it from clashing with the other letters.

The R and Y are one of my biggest challenges at the moment since I want them attached to the base letter. I'm not sure careful kerning will be enough. As for the size of the R, a disadvantage of working in Inkscape is that it's hard to try out different letter combinations. I think I was more worried about having it crash into the diacritics. I'll definitely trying out your suggestion.

…and I just realised I used a program to render my examples that doesn't fully support Lanna. Two of the glyphs are in the wrong order. >_<

@Arakun Both actually. But I've wanted to design an alternative writing system for English. I've wanted to make it featural but the sheer amount of irregular sounds in English makes it almost impossible to map it onto the English alphabet. Will be delving into more research ^^;

So they dont have an alphabet for it? I'm surprised. They should. I've rarely seen such an ardent fan base. If they did create it, fans would just eat that up!

I'm already running into limitation with Inkscape. I want to do strokes of varying width but there doesn't seem to be an easy way to do it. >_< As for alternatives to Fontforge I'm currently looking into two other free tools: BirdFont and Glyphr Studio.

@VitKillen: There are a lot more sounds in English than letters in the alphabet. My script does not have capital letters so I just use those for the extra sounds and some of the diacritics. What frustrates me most about the English phonology is the messy vowel system. I varies quite a lot between dialects and it just drives me mad that there isn't a full set of short and long vowel pairs. As for consonants I'll just go the Tengwar route: have one set of systematically formed letters and one set of left-over letters with arbitrary designs to break up the monotony. That'd also work great together with the way letters are arranged in Brahmic scripts such as Burmese.

@OsyenVyeter: Yeah, the fandom's pretty crazy. Designing a conscript for a children's cartoon might be a bit overkill, though not unheard of. The way they do text in the show is usually to just squash a bunch of latin (or greek) letters together, flip some of them over and fill in some of the space between them until you can barely make out what it says. There's also a series of ten hieroglyphs used in early episodes and some angular letters used in some later episodes. I did find attempts to turn these into full scripts but nothing that's caught on. I have spotted attempts at conlangs in some fanfics but they looked quite amateurish.

Haha. Messy vowel system indeed! Anyway . . . You can adjust the width easily in Fontforge. Double click on the pointer button when you have a glyph window open. This brings up a box that allows to to switch on an interpolator, so you can drag the lines and have it adjust the stems automatically.

This trick, by the way, is how I created the bold versions of my font, Dehuti. :)