When to Adjust Spacing

If you just want to have fun with FontStruct and make a quick font, FontStruct will space the letters in your FontStruction automatically and add a space character for you.

If you want more control, or the automatic spacing just isn't good enough for your needs, FontStruct provides a number of features to help you manually adjust the spacing between letters in your FontStruction.

By default, there is an automatic 1-grid square space added to the width of each letter in FontStruct (apart from the space the size of which varies). To override this and set the width of a letter manually, go to the Menu and choose “Show” and then “Letter Width”. This will make the width of the letter visible as a solid green line. 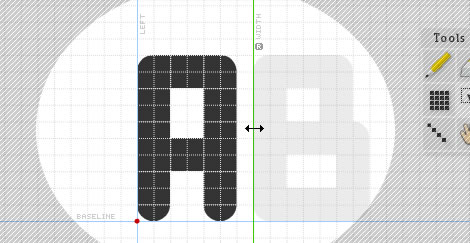 Drag this line to set the width of the letter you are editing. If you want to go back to the default 1-grid square width, click on the little “R” icon to reset the guide and it will start adjusting automatically again.

In addition to, or as an alternative to setting individual letter widths, you can also set a single, global value for the spacing between all letters in your FontStruction. Do this by going to the Preview screen, then selecting “Spacing” from the “Advanced” dropdown menu. This brings up a new palette titled “Spacing”. 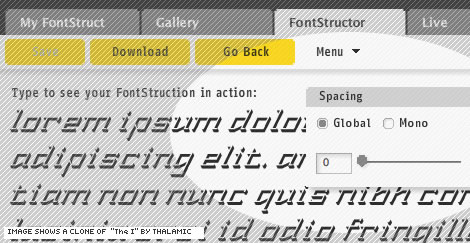 Many people want to make monospaced FontStructions - font designs in which every letter has the same width, like Courier and other “Typewriter” fonts for example. You can set a single fixed width (monospacing) for every letter in your font by clicking on the "Mono" radio button in the “Spacing” palette and then adjusting the slider. Again the units are grid units. 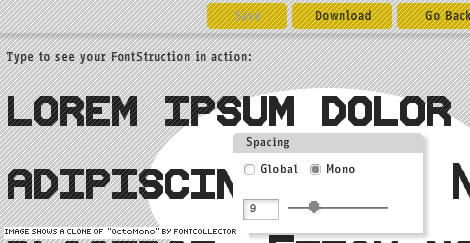 NOTE: If you are making a pixel font, we recommending using round (whole number) values for global spacing or monospacing.

There is a close relationship between the global spacing setting and the adjustable letter width. As you can see in the diagram below, spacing is added to the width of each letter. You can have a negative spacing value. You can also add space “before” a letter by moving it to the right, away from the fixed “LEFT” guideline in the FontStructor. 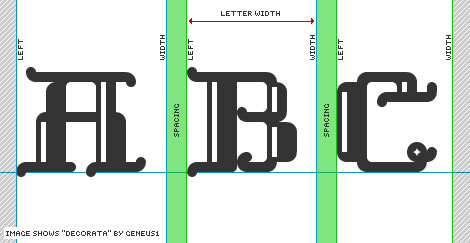 Please contact us if you can’t find the information you’re looking for here.