Sketchy is a pixel/bitmap font with an optimum size of... 44 pixels (if I counted right).  I finally finished off the Basic Latin letterset, plus there are a few other marks are included.

Official distribution copy is at:
https://w3n.us/sketchy

Any link in this text qualifies as the attribution link to give me credit (your choice) - just One active link to use it in as many projects as you want (commercial or personal), however you want.

Please go back to this; I think it's great.
Comment by Cohnisgone 11th April 2014

Really? Cool. OK. I have to work a lot in the next few days, but I'll get back to it next week if I can, or later, for sure.

I work tonight and tomorrow morning, have church on Saturday evening, then go to an American Indoor Football game with my son (we are the reigning and undefeated champions this season) tomorrow night. But after work on Sunday morning I will be off for a bit. I do have some stuff to do, but I can work on this a bit.

My 13 year-old son keeps me quite busy as well, he keeps winning or placing in math contests, the geography bee, wins an essay contest, LOL... a good problem to have, but then we have to take him to state or national competitions and it burns up a lot of time. I wish Fontstruct worked on tablets. ;)

At some point I intend to clone it and attempt to smooth-out the pixelated edges, but that one won't be a pixel font. :)
Comment by SymbioticDesign 11th April 2014

The uppercase is looking good, but I agree with Yautja, and I also think that the 'E' should be an ordinary E, but the current E could be used for the ampersand to greater effect.
Comment by Cohnisgone 15th April 2014

Cohnisgone, if it was anyone but you I would argue because that's how I make my E's when I print, but since you have been the guy egging me on, I'll do it for you and use that one as an alternate I tuck away somewhere. ;)

I'm doing taxes, editing my resume and applying for jobs today, though.

OK, I changed those. See if that works for you. Thanks!
Comment by SymbioticDesign 15th April 2014

It's good that you're keeping the other E as an alternate, because I actually quite liked it; I just thought that it looked too much like the ampersand and that there are already lots of anomalies (in the best possible sense).
Comment by Cohnisgone 16th April 2014

Yeah, I liked the other, older (now alternate) E better. But I don't like the ampersand. I'd have no problem nixing that and starting over.
Comment by SymbioticDesign 16th April 2014

OK, I switched the E back and made a new ampersand. I made the old ampersand a scripted E and added an ounce sign. The regular style E is a Greek Capital Letter Epsilon, now.

Plus, today I already added a heart, a heavy ballot X. And the original M was rotated to be the turned M. 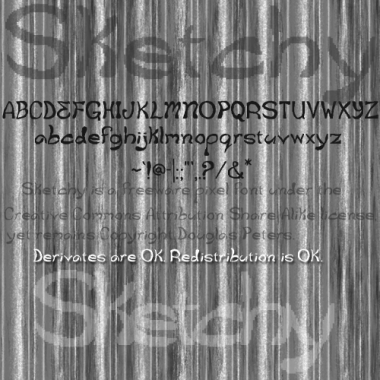 I actually get pretty bad grades in Math, I was pretty proud of the B i got this year. The problem was that my math teacher was horrible, he never actually showed us how to do the problems, he just told us to do them.

I really like how this font looks. The @ could be slightly bigger, and : ; look too "regular" for the style of this font.
Comment by Noah (winty5) 25th June 2014

Yeah, teachers matter. My son's teacher taught Chelsea Clinton, so she's good. We were lucky to get her for his teacher.

When I was in college I got an A in Pascal programming, but them my teacher retired and I had an Asian teacher (Korean, maybe?) with a heavy accent and I couldn't understand him at all. The whole rest of the class did, though, so I was seen as being a bigot or something. But I just couldn't understand what he was saying, so I had to drop the course and couldn't take any programming courses. I even changed my major (to art). Teachers matter.

I am still having an issue with @ and © being as big as caps. I really don't think they should be. They aren't that important. I just don't like big @ signs. And the Copyright symbol is defined as a small c within a circle by the US Patent Office. I think it should more on the scale of the Registered Trademark symbol, which is tiny.

The R within a circle sits to the upper right, I make the © the same size, I just position it differently.

So, I suppose in a font that you want to appear legible in small type, you would want that sizing. But I don't really think that there's some hard and fast rule saying that the @ and © should be as big as almost every other letter. I mean, there has to be something left to artistic interpretation.

That doesn't make you wrong, you are probably, most likely, right. Fonts and typographic letter sets do follow your logic. But now we are at a time of high resolution screens and print where smaller sizes are easily legible on any given media.

Anyways, that's just one of my quirks. Maybe I'll get over it, eventually. ;)

Well, I made the © larger, but I am still having an issue with making the @ larger because I don't think it should dominate an email address. Or a sentence, etc...

I'll hopefully get a little reading in on typographic design and see what's up there. But for now I'm pulling my artistic license out of my back pocket and using it. ;)
Comment by SymbioticDesign 30th June 2014

I wholeheartedly agree with adding your artistic license to it. And there aren't really any particular rules for design, like you mentioned, with the © and @. I was referring to text fonts, but this isn't a text/book font, so anything that appeals to you, and balances with the overall design, is fine.
Comment by TCWhite 30th June 2014

P.S.: I used my creative license for several of the characters in Tehuti. The ® symbol can be either large or small.
Comment by TCWhite 30th June 2014

Yeah, I think it depends on where it might be used. Nor sure this one will ever get used, but it's always fun playing with typography.
Comment by SymbioticDesign 1st July 2014

This font is supposed to be public, but I made a bunch of fonts private when they didn't look good in the new system.  @meek, can you see this?  I would like to show my fonts, but it wasn't all crammed together before.  Can you add a line height, or underline height option that might fix this?

Here, below, I am just archiving the font history that I had in the wrong place (the font description, again).

This font was supposed to be something totally different, but I made the lowercase characters way too small. Then I looked and I liked the few I did, so what the heck, I started another pixel font. This is not the final, it is just something for me to toy with without thinking too hard about how to make the puzzle pieces fit. Sat., April 12th, 2014: Added the capitals from A to O. I'll work on the others, later. Time to sleep. ;) Sun., April 13th, 2014: I finished all the main letters and some punctuation. I am not going to create any numbers for this in memorandum... In memorandum of the fact that math came between my son and I, as well as between my father and I. I am not rebelling against math, it's just that my son is so good at it that he spends all his time working math problems and it robs time away from our time together. With my father, he was always pushing math on me and I was so upset because once we got to geometry & trigonometry I was expected to take formulas on faith, but everyone refused to show me how the formulas worked when I was expected to show all of my work, always. I rebelled against the hypocrisy of a logic system that refused to conform to the very logic it was supposed to represent. Note that I am highly in favor of math skills. I am more rebelling against the mathematical education system that won't teach math skills correctly, effectively, or even efficiently. Anyway, there's my little rant. If you want numbers and mathematical symbols, you can put them in yourself. This is Creative Commons Attribution Share-a-like Freeware. Although my Copyright (2014) is maintained over the original work I did to create this Sketchy font, further contribution to the development of this font and any future derivatives are highly encouraged as long as the font remains under the same license in all modifications and re-distributions and remains free for commercial use. I will make a paid version of this font available should anyone require me to finish it, but as I said, you can do it yourself at FontStruct, easily. Sun., June 29th, 2014... I made the Copyright symbol larger, as I guess it is supposed to be.

Back online.  I finally fixed the font so it would display correctly in Fontstruct and while I was in there putting in an overly extreme low line in specials (the fix), I finished off the Basic Latin letterset. Plus a few other marks are included.

The rounded out Character set...