Here we have a filled-counter pseudoserif pseudostencil that is also a borderline IVO design at the same time! It also has a bit of a "double font" look going on if you look at the negative space.

1. Internal negative spaces of glyphs will be filled such that a 0.5-brick-wide void exists between the filled space and the glyphs themselves.

3. Vertical lines will only connect by two tapering curves or by the implied connections created by filled negative space.

4. Filled negative spaces may only join with the outer perimeters of glyphs. 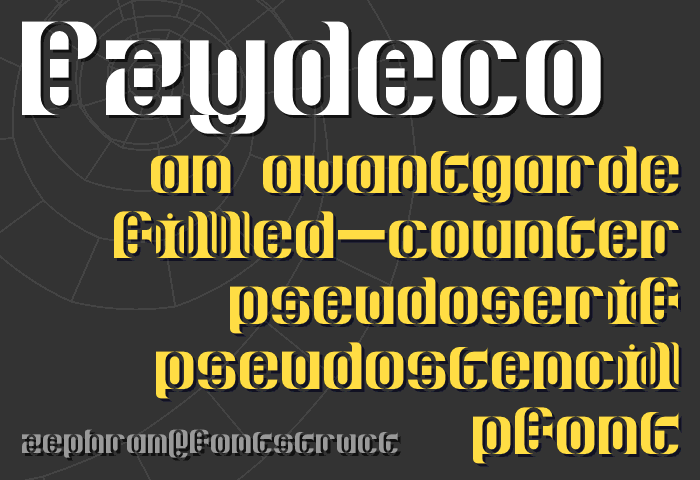 That's quite something, it has a strong psychedelic feel, the sampler is perfect to make eyes dance out of control ;) How did you manage to focus?!! 10/10 and fav

It looks like a crazy mash-up of four's breach of nightpegasus' n8lite  and of  jonrgrover's mouseblocks with a sprinkling of your own variation of dividing lines to create counters.

@Aeolien: Thank you! I just started doodling and experimenting with the filled-counter concept. When the middle bar of E started to intersect with the filled counter, I had to decide what to do about it, and that evolved into a set of formal design rules. Then I started giving some letters (i,l) serifs so that the filled spaces between the serifs would help those letters blend in with the rest.

As for how I focused... I looked at either the positive or negative space in isolation from the other at a given moment, and continually switched between these two gears as I worked on things. I agree that this design can be a bit harsh if one defocuses or tries to take in the whole image at once. A more low-contrast color scheme would mitigate that.